Boquete is a small town nestled in the green mountainous highlands located in the westen-most Chiriquí Province that boards with Costa Rica.  The Caldera River makes its way through this picturesque town.

Due to its elevation 1,200 metres (3,900 ft) above sea level, its climate is cooler than that of the lowlands. Its beautiful mountain landscape, temperature, and natural environment make it popular destination for the adventure traveler. 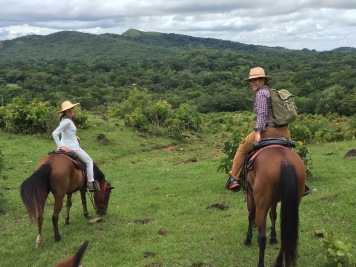 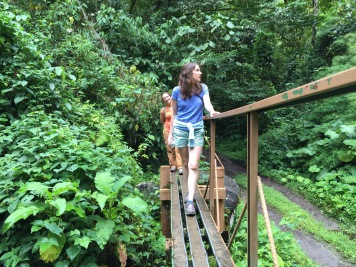 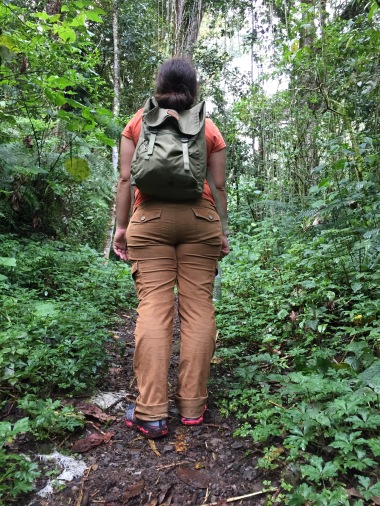 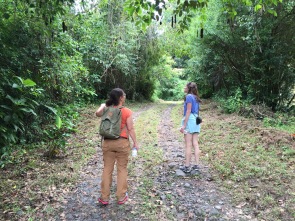 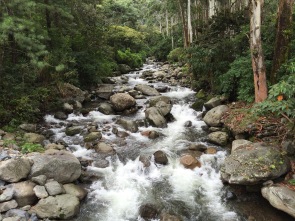 Our staff suggests the following activities while during your stay in Boquete: 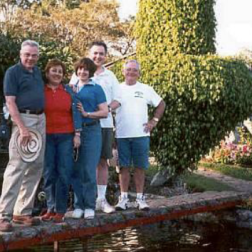 Early in the Morning we were picked up to be taken to the regional airport at Albrook for our flight to David. I had hoped to see the countryside from the air, but the plane flew at some 20,000 feet and above a cloud covering. Landing in David at 11:30 AM, Hans, our EcoCircuitos representative, met us at the airport and drove us to Boquete arriving there about 1:30 PM. Hans took us to a very nice small restaurant up the river Caldera from the town for a good lunch.
The restaurant sits right by the river and it was a most delightful setting. Boquete is located in the Western Highlands of Panama near the border with Costa Rica. Boquete and the Panamonte Hotel were we stayed are delicacies that must me savored slowly. Boquete, as some of you may know, is a narrow valley with the Rio Caldera running through the middle of it. Boquete means breach and that is exactly what it is, a breach in the mountains made by the river. With an
elevation of some 3300 feet, the place is pleasantly cool and can get surprisingly cold some times. There always seems to be an abundance of flowers in the area and coffee plantations are everywhere. Most of the coffee in Boquete is shade grown, that is the shrubs grow under taller trees. In the picking season one will see these shrubs full of red berry-­like fruit. The small fruit has a thin skin under which is the coffee bean covered with a very thin, but sweet, film. From lunch, we drove further up the river to see a small waterfall. Hans had been told that I wanted to see the Calderas River waterfall, but obviously he did not know where that was, because where he took us was just small fall from a small tributary to the main river. The falls I had wanted to see where inanother location, which I showed him in the book by William Friar, but he still did not know what I was talking about. So I was a bit disappointed, but not enough to be unhappy in that enchanting place.
That evening was very relaxing. We spent a little time at the large lounge/bar area which was beautiful with two large fire places. The fires were lit and with the cool wind blowing hard outside, it felt very good. The dinning room of the hotel was also very nice and classy. The five of us had an enjoyable dinner making real everything I had heard about the place. While the hotel proper is old, being originally built around 1928, it has been kept up very well and, undoubtedly, additions and changes have been made since making it very comfortable. Gene and I were housed in the main building with him having a corner room in the rear portion and I having a front room by the street close to the front desk. Both accommodations were very comfortable. Judith, Robin and Teresita were housed in a newer annex across the street by the river. Their rooms were very ample and nice very well decorated.
On our second day we were on our own for the morning. I went walking in search of flowers and sights to photograph while the other four walked a short distance to the town. As I walked up the Altolino road I came upon a bonanza of flowers. A place called “Mi Jardin, Su Jardin” (My Garden, Your Garden) represented some 6 acres of beautiful flowers of all kinds on a beautifully landscaped garden. And best of all, it was open to the public at no charge. After an hour and a half there, I went down towards the town to look for the others and tell them what I had found. I located them by the town square and told them. Then I milled a bit in the town and headed across the river, on an oldsuspension bridge, to walk back to the hotel by another road. Crossing the river again just above the hotel, I saw the ravages of the last floods, a couple of months ago: the river had all but washed off all the road, as you will see in the photo section. That afternoon Hans came by for us to take us to a coffee plantation. Little did we know what he hadin mind. We sort of expected a walk through a plantation for about an hour and then some more site-­seeing around the area. Instead, he took us where, not only do they grow coffee, but they also process it until it is shipped out in packets ready for the store shelf. Hans, being in love with coffee, gave us a 4-­1/2 hour recitation of the whole process from planting, through harvest, through roasting through tasting. I thought it would never end. I think an hour basic course with a little souvenir pamphlet would have done us much better because right now I can hardly remember what all he told us and I would have enjoyed having a little pamphlet telling me about it so I could use it as a reference. That night we decided to walk down to the town and eat at a restaurant the others had spotted during the morning. It was OK, but we all agreed that the food at the hotel was superior and made a point of that.

On Monday morning, after a wonderful breakfast with fresh everything, we piled up into Hans, SUV and headed down to David and then up to Cerro Punta. Our main objective were the mountains of Amistad National Park and most specifically, Las Nubes, a location in the clouds forest were we could take a two hour hike and then have a pic-­nic lunch Hans had brought.
The hike was wonderful. The vegetation is completely different from that which we saw at Barro Colorado Island. No howler monkeys this time, but some in the group spotted a Quetzal bird. There were many little streams throughout our trail and each more pretty than the other. Completing our hike, we went into the forest rangers house for bathroom facilities and then set up our pic-­nic in the porch of the facility. Coming down the road, we went into the Finca Dracula were one finds more than 1200 species of orchids. It is one of the most important collections in Latin America and I was overwhelmed with the quantity of flowers. It was at this Finca that we met with Sheila and Dennis, touring the Finca with them … that is to say that they visited the Finca and Sheila and I talked more than looked.
From the Finca, we went to Sheila’s house, which was very close by, and enjoyed a cup of coffee. Let me say at this point that the coffee in Panama is coffee! It is delicious and I, who likes coffee anyway, never passed a chance to drink some. Everywhere we went we found the coffee delicious. But back to Sheila, their house is nestled in the mountains of Cerro Punta with a nice little river flowing behind the property. It must be heaven living there. They do travel a lot by plane, a 4-­place Cessna, which they keep in a town nearby. After bidding our goodbyes, we headed back to David and Boquete. On the way down, we stopped for refreshments at a roadside stand getting a fresh fruit drink and buying some Panamanian candy to bring home. We got to the hotel at 6:00 PM rather tired, but found strength to have one last terrific dinner at the Panamonte Hotel. Then we had to bid goodbye to Judith, Robin and Teresita as Gene and I had to catch a very early plane the next day to Bocas del Toro, while the other three returned to Panama city. I loved our stay in Boquete and would have enjoyed a couple of more days there. Not only are there things to do near by, but the Panamonte is a great place to relax. And the weather was perfect.

Every week we publish part of Louis Celerier’s story of how he revisited the country where he grew up. Subscribe to this blog, or like us on Facebook, to make sure you do not miss any part of the story! 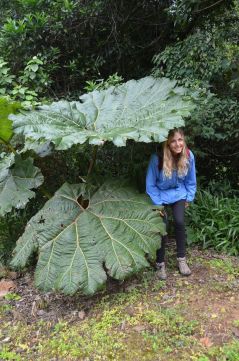 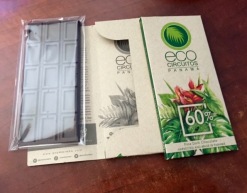 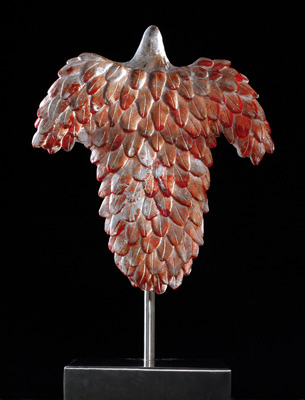 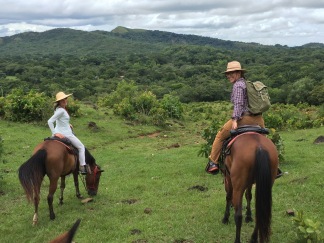 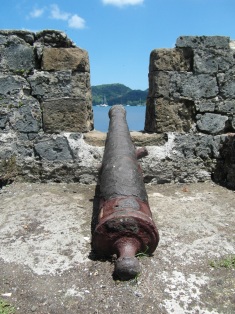 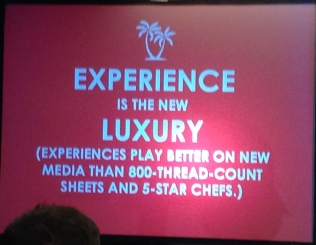 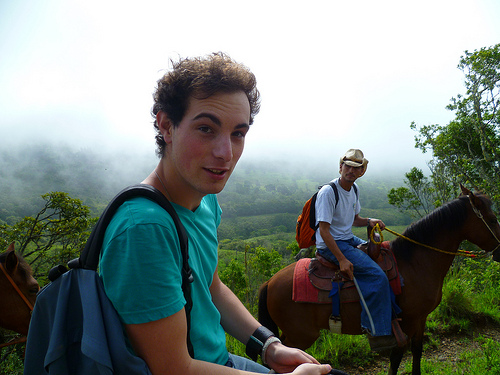 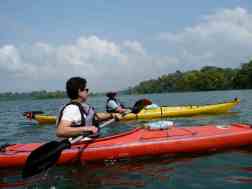 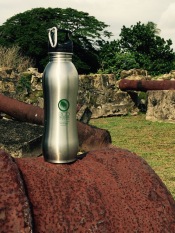 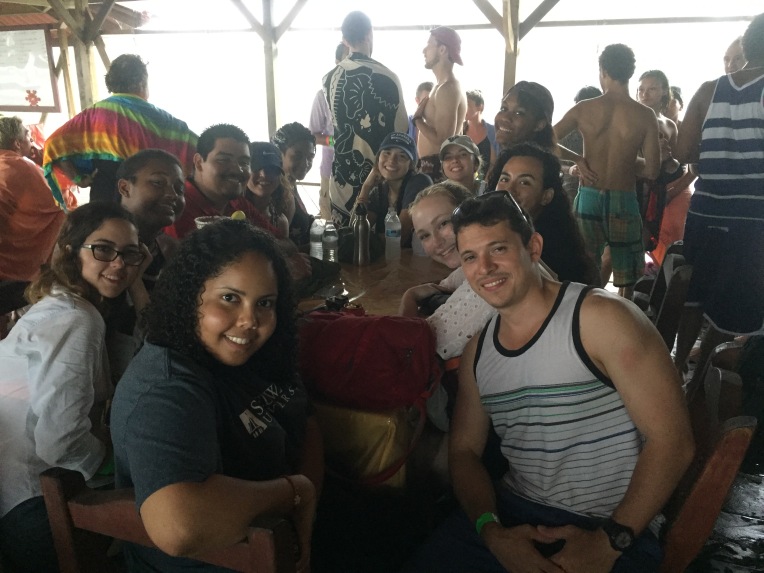